Children don’t develop all their speech sounds at once. There is a general order in which they appear. Some sounds, like ‘b’ and ‘m’, come early on in development. Other sounds, like ‘r’ and ‘th’, are much later on the scene.

Parents usually know whether their child’s speech development is on track for their age. But what happens when you are concerned? If you’d like to help your child with their speech sounds, here are some suggestions for things you can do.

Modelling speech
First off, there is a technique called speech ‘modelling’. So, what is modelling? Well, when a child uses the wrong sound, you repeat what they’ve said, but use the correct sound.

For example, your child says “Look mummy! Tat!” You reply “Yes, cat…a black cat”. In this example, the child gets to hear the ‘k’ sound three times.

Although you are correcting them, they are blissfully unaware of this. If a child can’t yet say a particular sound, it is best not to put pressure on them. So, it would be counterproductive to respond “say the sound properly!” This could result in the child trying again, but then getting the sound wrong again.

It’s no surprise that failure tends to discourage all of us, including children. Praise and positive feedback are far more motivational.

Auditory input. Eh? What’s that?
When put into plain English, this means giving your child lots of opportunities to hear sounds which they can’t yet say.

For example, would you like your child to learn the sound ‘t’? Then you could play games and share storybooks about Thomas the Tank Engine, Tigger, teddy or any other character whose name starts with a ‘t’ sound.

In this approach, the parent does lots of talking, whilst the child enjoys listening. Hearing the sound ‘t’ repeatedly helps build a good, strong blueprint for that sound in the child’s brain.

You can play listening games matching toys and pictures to musical, animal, transport and other everyday sounds. Any other games where the child has to listen carefully are good too. These include ‘Simon Says’ and ‘Stand Up If…’.

Or you could try games where you say a word and the child has to choose the matching toy or picture. The Department for Education and Skills have written a guide called ‘Letters and Sounds’. It has lots of good suggestions for listening games and you can find it online here:

Good listening skills help children to tune into speech, hear the subtle differences between speech sounds and build a set of sound blueprints for future use. Listening supports speaking. It will, in time, help your child to say those sounds themselves. 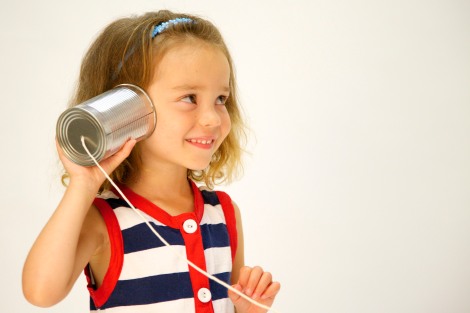 Curious to know more?
Do your child’s speech sounds seem unusually muddled? They may need some expert help. A Speech and Language Therapist can provide this.

Got a question about your child’s speech and language development? Get in touch with Kirsty Henderson. Kirsty is a qualified Speech and Language Therapist, practising in Bristol.

Want to find out more about speech and language topics? Check out my blog at http://happytalkbristol.co.uk/blog/