Tucked away on a hill in Montpelier, next to where the railway line weaves through the city, lies a green allotment garden, quite unlike any other.  For while this allotment garden grows vegetables and salad plants just like many other city allotments, it is also abundant with grapevines, climbing and creeping tall under the Bristol sun.

This small urban vineyard was planted by local residents, James Bayliss-Smith and Shelley Nania, with the intention to produce their own wine on a micro scale and thus Nania’s Vineyard was created.

Fast forward a few years and as his vine matured, so did James’s growing interest in English wine and he was inspired to launch a new drinks company focusing on English canned wine.  For their first vintage, and their first product, Nania’s Vineyard has launched with an amazing rosé spritzer which is well-worth sampling! 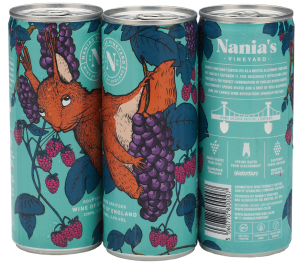 This week I had the pleasure of meeting James and Shelley in their peaceful allotment garden to learn about Nania’s Vineyard, and, of course, to enjoy a glass of their beautiful wine!

James was introduced to the world of growing grapes quite inadvertently.  In the garden of their new home was a rather neglected grape vine that the previous owner had said was 45 years old.  Soon after moving to Montpelier with their two young children, Shelley had been busy taming and trimming their new garden and had severely cut back the dormant vine without knowing what it was.

Of course, the vine grew back the following spring and faced with a blank canvas, James set off to learn all he could about growing grapes and producing his own wine.  He decided to plant thirty new vines out on his allotment.  This was never going to produce a commercial amount of wine but it was the spark that lit the fire that fuelled James’s dream of producing wine on a bigger, more commercial scale. 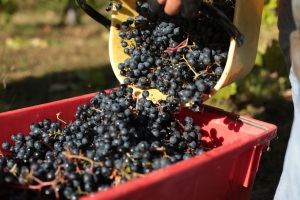 Last summer, with his own vines reaching fruiting maturity, James made his own wine for the first time and Nania’s Vineyard’s first allotment vintage was complete!

Alongside this micro production, much bigger ideas were fermenting and James sourced some rondo grapes from a vineyard in Essex, the sunniest, driest part of England, and commissioned a winemaker to produce an English rosé as a base for an exciting new English wine spritzer.

The grapes were pressed gently to produce a fruity rosé, then the wine was blended with spring water drawn from the famous spring beneath Glastonbury Tor.  Finally, a touch of raspberry shrub has been added to create an extra dimension to the drink.  The resulting vintage product is perfect: light, sparkling and refreshing with an intense flavour – a real taste of summer!

It was important for James and Shelley that their wine should come in cans rather than bottles; a novel idea in the UK and a rather good one, too.  Cans are much more sustainable; glass is heavy and is actually not very well recycled in the UK.  Canned wine also benefits the quality due to it not being exposed to light.

Cans are also more portable, practical and convenient: perfect if you are off for a summer picnic or going to a friend’s house for drinks as they are unable to break, easy to carry and lighter, too.  Nania’s Vineyard 250 ml cans are also quicker to chill than bottles, making life easier by enabling you to have that well-deserved chilled glass of wine that bit quicker!  Plus, the 250 ml size of the cans is ideal if you fancy a relaxing drink in the evening after a busy day at work or with the kids but don’t want to open a whole bottle unnecessarily.

The packaging of the cans is also environmentally-friendly.  Again, sustainability was James and Shelley’s priority and they decided that the labels should be made from corn starch rather than the standard – and unsustainable – plastic.

A great design was needed, a hugely important decision.  James approached talented Bristol artist, Alex Lucas, aka Lucas Antics, to ask her if she would like to be involved and she happily took on the challenge, creating a beautiful design!

As the allotment receives many furry visitors, it was decided that the design should feature one of its more frequent visitors, a cheeky squirrel who regularly visits to forage for seeds and fruits.  The design also features red grape vines and raspberries, depicting, of course, the rondo grape and raspberry shrub which complete the spritzer. 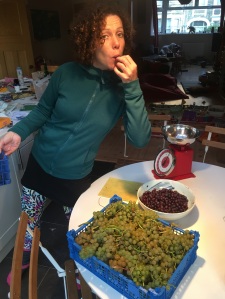 As for the lovely name, “Nania’s Vineyard”, this was named after Shelley’s grandfather who made the long and arduous voyage to the UK on a boat from Mumbai in the 1950s, a noteworthy achievement and one which Shelley and James wanted to honour.

Since its launch a few months ago, Nania’s Vineyard’s has proved to be a huge success in Bristol.  James described their launch week as “phenomenal”, explaining that the orders came in so quickly and in such great numbers, that they temporarily ran out of wine!  Grape and Grind on Gloucester Road is already stocking their wine and orders are continuing to come in fast and furious!

James’s plans and aims for the future don’t stop here, however. Next summer’s vintage will include a white wine spritzer created from the bacchus grape, a white grape which has a powerful flavour and character and grows particularly well in our cool climate.  The can will feature another one of Nania’s Vineyard’s furry visitors: a red fox!

James is also exploring the idea of producing his own kombucha, a sweetened tea well-known for its health benefits as well as being an agreeable alternative to alcoholic drinks.  This will be barrell-fermented and sold in champagne bottles.  Long-term, one of James’ ambitions is to open an urban winery in Bristol. 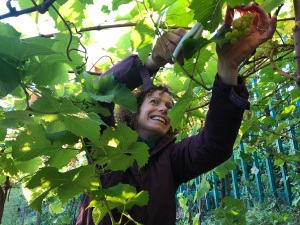 If you would like to buy some of Nania’s Vineyard canned wine you can do so here.  A box of 6 cans is normally £24 and a box of 12 is £48 (including VAT), however, Bristol Mum readers are entitled to a special 10% discount this summer – simply use the quote “BRISTOLMUM” at the checkout.  Nania’s Vineyard are also offering free delivery all summer to Bristol postcodes from BS1 to BS9.

I am certain that Nania’s Vineyard and its wonderful wine will continue to innovate and will prove to be a great success in Bristol and beyond, leading the canned wine revolution!